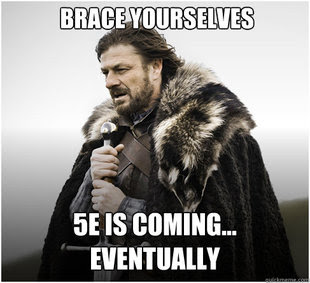 Today Wizards of the Coast announced that it is developing Dungeons & Dragons 5th Edition (technically this will be #7, but who’s counting?). This may cause many people to roll their eyes and wonder “Again?” To that I say “Yes!” And here’s why...

First of all, it’s not like this kind of thing is new. How many editions of GURPS are there? HERO System? Shadowrun? Tabletop RPG’s are supposed to be evolving, ever-changing. Otherwise, we’d all still be using Dave and Gary’s original rules.

Second of all, 4th Edition sucks. Let me just say that right up front. Your mileage may vary, but this is my blog, so I say it sucks. And when I say it sucks, I mean that it just isn’t D&D anymore. It’s an MMO on paper. 4E tries too hard to emulate the button-mashing strategies of MMOs and video games, and leaves behind the nuanced playing and social interactions that D&D pioneered. In short, with 4E they left the D&D track, and now they need to get back…er…on track.

That being said, it’s still a fun game. The problem I had with it the few times I played was that I got easily confused about what my character could do, and when he could do it. So much so, that I found myself concentrating on that, rather than enjoying the story. Maybe I should say it sucks “for me.”

So, what would make a “perfect” edition of D&D? Well, in my opinion (shut up, it’s my blog, I said!) they already did that with 3.5. 3E was innovative in that it created a game that works, no matter how many or how few of the rules you use. At it’s core, using a very few rules can garner a very enjoyable game. But, it also provided tons of rules to make the game as crunchy or as smooth as you like. In short, if people were willing to open their minds to the possibilities presented in 3.5, and get rid of the notion of “If it’s in the rulebook, you have to use it,” it could be ANY game they wanted it to be.

Can WotC do that again, and do it better? Probably. Based on their announcement, they are relying heavily on massive playtest feedback. This will no doubt inundate them with varying ideas. But, I can see that the most popular ones will get some good treatment. And as long as they keep the game itself flexible, the rest can work as well.

For me, personally, what I would like to see is some scaling back on the presentation. Rules are rules, and with a little adjustment, I can handle most of them. But, something about the recent books (even as far back as the 3.0 books) seems overblown to me. Maybe it’s the full-color art inside. Call me nostalgic, but there was something very charming and inspirational about the B&W illustrations in the old books. Also, I rather prefer the Medieval Europe look and feel of the equipment being depicted. I can see going kind of “alien” with the demi-human races, but for the most part, I like the pseudo-realistic portrayals in older editions.

Also: Pricing. D&D has a long tradition of requiring the Big Three core rulebooks; Player’s Handbook, Dungeon Master’s Guide, and Monster Manual. With those three books alone, infinite games are possible. The downside is, with production costs being so high (see my comments on art), these books run about $40 each. That’s $120 just to get the basics! Maybe they can provide variations of the game. A “cheap” version, similar to the old red book that had just about everything you needed in about a hundred soft-bound pages. That would be cool, I think.

However, as a business in it to make money, these may not be valid considerations.

In short, I want a flexible game that allows me to be as detailed or flowing as possible. One that caters to as many different play styles as possible. And most importantly, one that allows for improvised rules on the fly. That right there is, from a rules standpoint, the one issue that separates Tabletop from Computer. If my character wants to improvise by throwing his shield, he should be able to do that without much fuss, and with a reasonable chance for success. Can’t do that at all in WoW.

I wish them luck, and I will no doubt buy at least the core books when it comes out. If for no other reason than to have the right to bitch about and bash them.
Posted by Tom Doolan at 10:13 AM

Since I don't even know what MMO is, I think you are addressing a nube in me.

Very good post. Going to link it on my blog. Thanks for the read.

Tim - Thanks for reading and sharing!

Thanx Tom.. I've been playing in a 4E campaign for almost two years now. Great DM but I've been having a hard time getting past the combat mechanics.. So to reiterate what you said.. I too think it 'sucks'. I'm hopeful that they will steer the D&D ship back towards where it belongs..

Yes, but games like Hero, GURPS, Call of Cthulhu, Battletech are still fairly compatible. CoC is probably the best of the bunch in that regard. The other would take some tweaking. 3e requires some tweaks to run in AD&D 1E, but really, invert the AC, uses HD and hp as writen and you're golden for many modules in d20. 4e...not so much.

Very true, Anthony. I've always thought that, up through 3.5, each edition seemed to be a natural, logical prgression from the last. However, with 4E, they seemed to have torn down the walls to the foundation, and completely rebuilt the entire house from scratch. It has shades of previous editions, but it works in a completely different way. 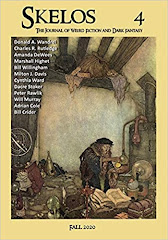